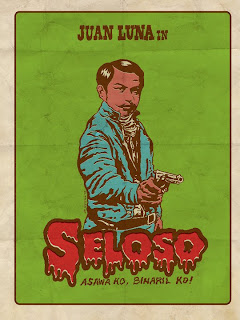 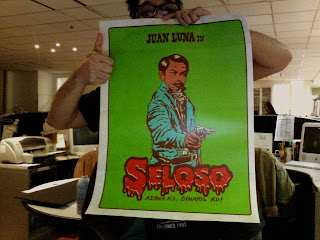 Party Pilipinas' Director extraordinaire asked me if I can do my take on Juan Luna. I did my research and I did find some interesting facts about the guy and I decided to capitalize on it.

"The jealous Luna frequently accused Paz of having an affair with a certain Monsieur Dussaq. Finally in a fit of jealousy, he killed his wife and mother-in-law and wounded his brother-in-law, Felix, on September 23, 1892. He was arrested and murder charges were filed against him."

Wow! It really reminds me of some 80s action movies. Bang! Bang! Bang!
Posted by jpcuisonpopart at 2:43 PM

jpcuisonpopart
JP graduated with a Bachelor of Fine Arts in Visual Communication from the University of the Philippines. As a young talent, he was awarded with the Best Thesis recognition. JP is also recognized highly in the field of advertising as he is a two-time Philippine representative to the prestigious Cannes Young Lions International Advertising Festival. Though he has a hectic schedule as a senior art director, he still manages to pursue non-advertising endeavors. He just concluded his 1st solo exhibit entitled "GIGZILLA" (a collection of his gig posters) at Pablo Gallery, Cubao X last May, 2010. He is also half the group that produces the underground comix sensation, PUNNX COMIX. He loves designer vinyl toys.